According to Google, the gaming industry is one of the most popular areas, which has grown by 23.1% recently and continues to grow. Nowadays, professional game and application developer is a very popular and promising specialty.

Until recently, the development of computer games was considered an exclusively professional field of activity of a small circle of companies, but with the development of modern technologies, everything has changed dramatically! Game development has become more accessible than ever. Now everyone can create their own game, even a kid!

Now almost every kid is passionate about computer games and spends his free time playing them, and some of them dream of creating their own masterpieces. Thanks to the study of such a promising direction as game development, a little programmer will no longer waste time - he/she will learn how to develop, program and create his own game universes!

If your child is interested in computer games or information technology, enroll them in our course "Development of 2D & 3D games in Python", where they will learn how to program by creating their own games.


Who is this course suitable for?

During the training, the students work with Godot Engine, a professional game engine with a unified interface for creating both 2D and 3D games, which supports most programming languages due to its openness.

This engine comes with a programming language called GDScript, which is based on Python. Many developers starting with Godot were pleasantly surprised by how quickly the language was mastered. That is why our course is suitable for both beginners and kids familiar with the basics of programming.

We will study the features and capabilities of the Godot engine, learn how to develop games using its GDScript programming language, gain teamwork skills, create our own worlds, and much more.

The training begins with the study of the program and ends with the publication of their own projects. Thus, the kids will not only learn how to create 2D and 3D games, but will also be able to share them.

In the process of learning, the creative thinking of the kids develops, which contributes to the generation of many ideas for plots for their works, the creation of unique worlds and the elaboration of an exciting place of action.

Since Python is the basis of the programming language studied in the course, the student will get acquainted with its syntax and it will be easier for him to program in this language in the future.

The student will have a portfolio of projects created during the entire course at the end of the course.

Before starting working in Unity, we recommend getting acquainted with the Godot Engine, as it is easier for kids who do not have any knowledge and skills in game development, in terms of the interface and individual mechanics. GDScript was created specifically for writing short and simple scripts for games on the Godot engine. By programming on it, it will be much easier for the student to understand the logic of object-oriented programming and start working with other game engines and learning more complex programming languages.

Upon completion of the course kids will:

What do you need for classes?

If classes are online:

System requirements for the computer:

Please make sure that your computer is suitable for classes and check this Link for recommendations.

Instructions for installing programs for the course: 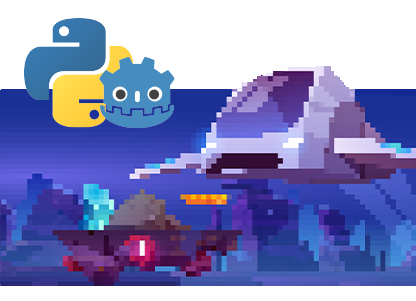 for beginners and continuing

individual and group classes, offline and online (in real time).

* Depends on the tempo of assimilation of the material by students.